The Heat Is ON! 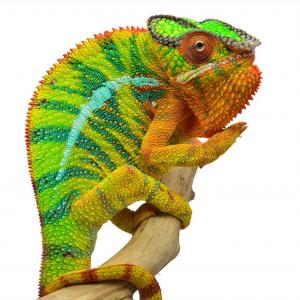 In the wild panther chameleons occupy both forests and coastal lowlands where the humidity averages 70 percent and temperatures are mild. Temperatures range widely between locales and seasons, but the average is 70 degrees Fahrenheit during the season lows and in the 90s during the season highs. Panther chameleons typically inhabit trees and bushes, and they prefer to stay off the ground.

Highly susceptible to upper respiratory infections caused by stagnant air, chameleons should be housed in a tall, all-screen enclosure. Males require space measuring at least 2 feet wide, 2 feet long and 4 feet tall. Females and juveniles can be kept in enclosures measuring 11⁄2 feet long, 11⁄2 feet wide and 3 feet tall. At Tiki Tiki Reptiles we furnish our cages with live trees, usually a schefflera (also called an umbrella tree), in concert with dried bamboo and wooden dowels for climbing. The tree provides the chameleon with cover and also helps maintain humidity, which should range from 60 to 70 percent. Mist two to three times a day or as needed.

We do not use a substrate because a bare floor is easier to clean and doesn’t give feeders a hiding place. Never keep adult males and females in the same enclosure unless mating is the goal. Use a heat lamp and an ultraviolet light to provide a 12-hour photoperiod. Our heat lamps are normal household bulbs that maintain a basking spot temperature in the mid to high 90s. Our ultraviolet lights are Zoo Med ReptiSun 5.0 or 10.0 UVB fluorescents. Chameleons require UVB rays to help absorb calcium. Without UVB they run a high risk of developing health problems.

Feed chameleons daily. The amount depends upon their size, but feed as many insects as they can consume in one sitting. Although the lizards appreciate variety, crickets will likely be the staple diet. Other options are cockroaches, superworms, silkworms, hornworms, houseflies, stick bugs, and just about any other pesticide-free and nonpoisonous insect that will fit into their mouths. You can also offer a pinky mouse once a month.

Gut load all insects first with a high-calcium food, such as store-bought greens or a commercial gut load. After gut loading, dust each insect with a vitamin supplement. I use four different kinds — Rep-Cal Calcium Without Vitamin D3, Rep-Cal Calcium With Vitamin D3, Rep-Cal Herptivite and the indoor formula of Sticky Tongue Farms Miner-All — at different intervals. I use calcium without D3 three times a week, calcium with D3 once a week, Miner-All once a week and Herptivite once every other week.

Males are generally ready to breed immediately. Females, however, must be ready before they accept advances. Unreceptive females turn black, hiss, gape and attempt to bite advancing males. Receptive females change from their normal brown, white and khaki colors to a beautiful salmon pink. Once one consistently displays this color, you may introduce her to a male’s enclosure.

Displaying his best colors, the male will head-bob while advancing toward the female. If receptive, she remains pink and accepts his advances. Copulation commences, and breeding can take several hours. You may keep them together for multiple mating sessions until the female rejects the male, which can take a day or two. You don’t have to watch them the entire time, but check on them often to make sure everything is OK. The male may get too aggressive, and the female must be removed if that happens.

Gestation is 20 to 30 days. Roughly 10 to 15 days after mating, the female stops eating until she lays eggs. When you see her roaming the enclosure bottom, place her in a laying bin, so she can dig a tunnel and lay her eggs. This laying bin should be at least 10 inches deep and filled with soil moist enough to hold a tunnel. A 5-gallon bucket or a small rubber tub works fine. No water dish is necessary, and you don’t need to mist her at this point. Just leave her alone. The damp soil will keep it humid enough.

Do not watch the female dig or lay. This can scare her, and she may abandon the hole and risk dying due to her retaining the eggs. After laying she fills in the hole. Take her out at that time, and return her to her cage. Give her extra water and calcium-rich food.

After removing the female, carefully dig up the eggs, and keep them in the same orientation you find them. A clutch commonly ranges from 10 to 40 eggs, but 20 is average. Place eggs in a sealed container with damp vermiculite. Achieve this dampness by soaking the  vermiculite and then ringing it out until only a couple drips come out.

Place the sealed container in a cool, dark closet, and leave the eggs alone for eight to 12 months. We don’t open our containers to circulate air, but they do have two to three one-sixteenth-inch holes drilled into the top. Temperatures can range from 65 to 80 degrees, but avoid extremes. Humidity should be approximately 80 to 90 percent.

Panther chameleon males reach more than 20 inches in total length and display an amazing number of colors. Many colors are determined by the different Madagascar locales, of which there are more than a dozen. For example, the Nosy Be locale is normally predominantly blue, but the Ankaramy locale is mostly pink. Female panther chameleons are usually no more than 13 inches long. Not as colorful, they typically display a pale brown or salmon-pink, and some turn black when gravid.

Keep hatchlings well-watered, mist them three to four times a day, and have an abundant supply of small crickets and fruit flies to feed them. Frequent feeding is very important, so have food ready when the chameleons hatch. We feed them two to three times a day, and each gets as many insects as it will eat.

With the guidelines given here you should be able to successfully care for and breed the amazing panther chameleon. Keep in mind that these are only general guidelines. As you gain experience, tweak practices to what works best for you and your pets.